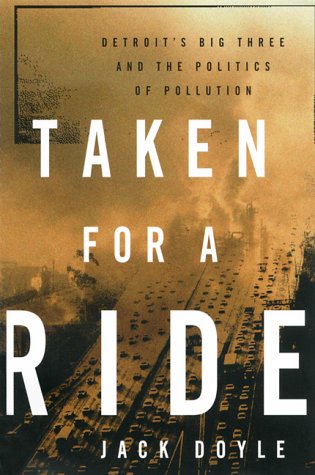 Taken for a Ride: Detroit's Big Three and the Politics of Air Pollution

In a riveting tale of colossal negligence and corporate skullduggery, Doyle (Altered Harvest) contends that Detroit auto makers duped the American people for half a century with claims that they lacked the technology to produce low-cost, low-pollution vehicles. Doyle, a former analyst with the Environmental Policy Institute in Washington, D.C., makes a strong case that General Motors, Ford and Chrysler have fought emission inspection programs, blocked or diluted requirements for pollution control systems and fudged testing data. Despite the big three's apparently strenuous efforts to hold back the development of electric vehicles, key elements of their technology are now advancing, he reports. But the struggle to reduce emissions has been a contest to squeeze better performance out of patchwork technologies, even as the global fleet of automobiles is slated to double in 20 years--making environmental problems worse. The goal, as Doyle sees it, is ""`zero emissions technology...' Clean cars period, not just cleaner cars."" From this standpoint, he avers, the Clinton White House's Partnership for a New Generation of Vehicles, a cooperative venture begun in 1993, has been a diversionary sham, deepening Detroit's commitment to the internal-combustion engine and placing truly clean cars perhaps ""several decades"" away. Doyle's robust, often shocking narrative is enlivened with reproductions of ads, corporate and government documents, and propaganda campaigns. Although his exhaustive detail may daunt the general reader, his well-argued study is a valuable source for environmentalists, policymakers, consumers and partisans on all sides of the debate. Agents, Ronald Goldfarb and Robbie Hare at Goldfarb & Silverberg Literary Agency. (May)
close
Details