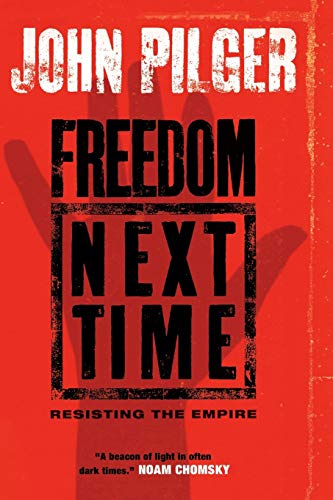 Freedom Next Time: Resisting the Empire

Well-known journalist and filmmaker Pilger remains faithful to his decades-long quest to penetrate the citadel of political power and show that the emperor isn't wearing any clothes. Reminding readers that "if power was truly invincible, it would not fear the people so much as to expend vast resources trying to distract and deceive them," he surveys five countries where freedom has been deferred. In his first example, Pilger conducts a searing probe into the widely unrecognized fate of the Chagos islanders, who in 1971 were brutally expelled from their homeland through secretive and illegal actions by successive British administrations to make way for a massive American military base at Diego Garcia. Then he examines Israel, which he calls "the undisputed world champion violator of international law" and its brutal grip on the West Bank and Gaza. He also looks at India, a country in which, he argues, the "modern imperial cult of neo-liberalism" has led to increases in poverty. In South Africa, he shows, poverty is rife and whites still own most of the good land, and in Afghanistan, land mines, "gender apartheid" and despotism still reign supreme, despite the American-led "liberation." This highly informed, thoughtful and passionate work is as important a thread in the world's growing tapestry of political counternarratives as those of Dee Brown or Howard Zinn.