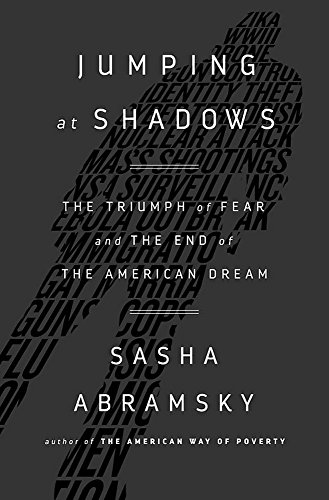 Jumping at Shadows: The Triumph of Fear and the End of the American Dream

In this pensive exploration of the American culture of fear, Abramsky (The House of 20,000 Books) identifies a variety of personal and societal ills, including widespread anxiety disorders, overstuffed prisons, income inequality, and Islamophobia, as “symptoms of a social system in deep crisis.” In eloquent and devastating terms, Abramsky shows, over and over, how fear hijacks rational decision making, empathy, and rational analysis, and instead plays on implicit bias and gut response. Yet the human brain is enormously prone to miscalculating risk, influenced, as Abramsky demonstrates, less often by statistics than by sensationalist news cycles or single, horrific acts. Modern American phenomena such as endemic gun violence and lockdown drills at elementary schools derive, Abramsky argues, from rising paranoia and a constant feeling of high alert, stressing our brains and our social psyche into following leaders who present a show of force at the cost of our privacy and dignity. It takes a strong stomach to handle all the stressors Abramsky investigates—the stories range from Kafkaesque absurdity to nauseating cruelty—but his mild tone and deep compassion ultimately guide the reader to the only rational response: resist inflammatory rhetoric and recover a “healthier way of living, a calmer, less vengeful notion of community.” [em]Agent: Victoria Skurnick, Levine Greenberg Literary. (Sept.) [/em]
close
Details