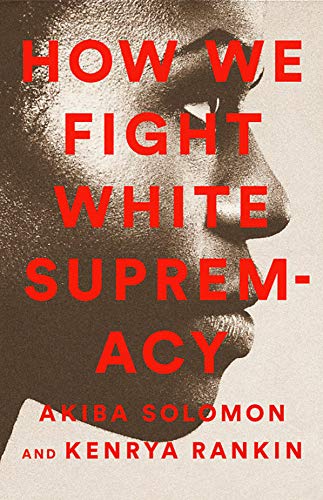 How We Fight White Supremacy: A Field Guide to Black Resistance

“There are millions of ways to land blows” against white supremacy, according to Colorlines editors Solomon and Rankin, and in this sharp yet celebratory “multidisciplinary... showcase for some of our most powerful [black] thinkers and doers,” they provide readers with a blueprint for protest. The themed chapters (“Laugh to Keep from Crying,” “Someday We’ll All Be Free”) knit together interviews, comics and art, essays, brief profiles of organizers, poems, and quotations. Those featured include organizers such as Alicia Garza and Tarana Burke, comedians, filmmakers, pastors, children, and such writers as Ta-Nehisi Coates, Kiese Laymon, Jamilah Lemieux, and Damon Young. Contributors’ ways of resisting white supremacy are varied, from directing their money toward black-owned businesses and devoting their lives to helping other black people (via, for example, therapy and advocacy) to using their creative careers to draw attention to white supremacy’s manifestations and counter it with positive portrayals of black people. A number of entries discuss the internal, psychological work of countering white supremacy, including adrienne maree brown ’s moving meditation on self- and romantic love, “Touching White Supremacy, Touching Beyond It (Strategy: Intimacy).” This dynamic collection will inspire, energize, and entertain readers. Photos. (Mar.)
close
Details