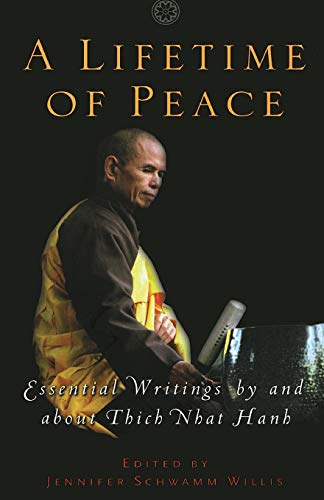 A LIFETIME OF PEACE: Essential Writings by and About Thich Nhat Hanh

This collection of musings, poetry and interviews has the main ingredient needed for a successful anthology—a fascinating subject. Thich Nhat Hanh is the renowned Buddhist monk who was exiled from his homeland of Vietnam in 1966 because of his global peace activism. The following year, Martin Luther King Jr. nominated Thich Nhat Hanh for the Nobel Peace Prize. For the past three decades, the monk has taught his own form of "engaged Buddhism"—which means applying Buddhist teachings to social problems. Known to his students as "Thay" (the Vietnamese word for teacher), this small and drably dressed man has become one of the most admired spiritual teachers of the world. His writings on peace, anger, suffering and mindfulness (many of which appear in this collection) have universal appeal because of his calm voice, clarity and endearing humility. So veteran editor Willis ( ) had a dream combination—a great man and a great writer. She also had a previous model—that of from the same publisher. Despite all this collection had going for it, it falls short of its potential. Its main shortcoming is the lack of a clear thematic structure; the anthology reads like a series of scavenged writings rather than a satisfying whole. Even so, everything Thich Nhat Hanh writes is a singular Zen delight, as are many of the other entries, especially the interviews with bell hooks and the editors of .