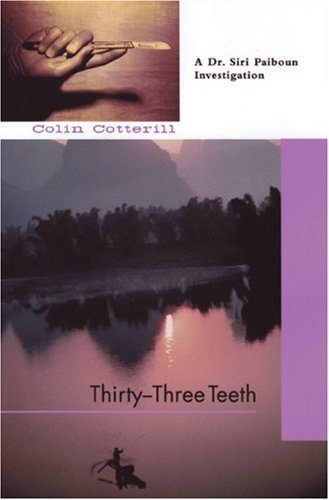 Dr. Siri Paiboun of Laos—"reluctant national coroner, confused psychic, [and] disheartened communist"—employs forensic skills and spiritual acumen to solve a series of bizarre killings in Cotterill's quirky, exotic and winning second novel, set in 1977. Could an old escaped bear be mauling Vientiane citizens? Or is it something more mystical—say, a weretiger? When Paiboun is summoned to the capital to identify the nationality of a pair of charred bodies, he quickly flags them as Asians killed in a helicopter crash, and his ability to connect them to the royal family annoys Communist Party leaders. As Paiboun learns of an effort to get the remaining royal family members out of town, he's arrested, accused of damaging government property. But the witness's testimony is questionable, and Paiboun, representing himself in court, escapes this scrape as handily as he's escaped others before. Paiboun's droll wit and Cotterill's engaging plot twists keep things energetic; the rather grisly murders are offset by comedy, including a scene in which a Party member attempts to impose regulations on the spirit world. The elegant, elderly Paiboun seems an unlikely vehicle to carry a series (he debuted in 2004's ), but he does so with charm and aplomb.