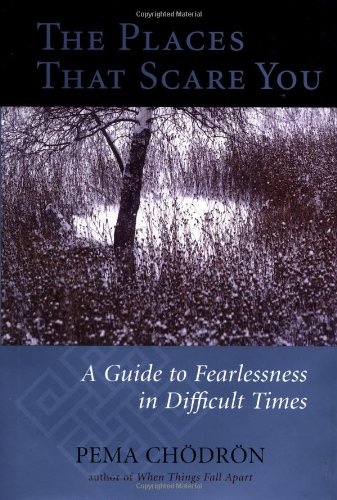 THE PLACES THAT SCARE YOU: A Guide to Fearlessness in Difficult Times

American Tibetan Buddhist nun Chödrön () teaches an intense form of meditation in which readers are encouraged to become "warrior-bodhisattvas," those who courageously confront suffering. Warrior-bodhisattvas, according to Chödrön, are willing to have their inner selves broken, while keeping their minds and hearts from shutting down. They take on suffering with compassion and loving-kindness, working through their own emotions of fear or anger to help alleviate others' pain. Chödrön highlights six traditional to model (generosity, discipline, patience, enthusiasm, meditation and unconditional wisdom) and cautions that ego, self-deception, unforgiveness and a grasping for permanence all present barriers to compassion. True meditation cultivates the qualities of steadfastness, clarity of vision and attention to the present moment. Despite the title, this book is more about generating compassion than facing fears. A few humorous vignettes are interspersed with the deeply philosophical text, such as when Chödrön describes discovering her boyfriend in an intimate embrace with another woman. She tried to throw something at the couple, but the thing she picked up was a priceless piece of pottery that belonged to their millionaire host. "The absurdity of the situation totally cut through my rage," she explains, noting that many times "wisdom is inherent in emotions." Moments such as these mitigate the intensity of this highly cerebral book, which will offer meaty reflections for the serious practitioner, but less guidance for the mere bookstore Buddhist.