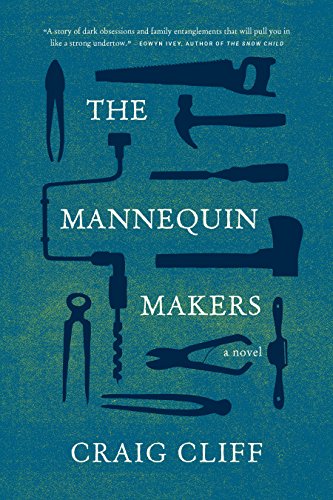 New Zealander Cliff makes a stunning American debut with a story about obsession gone horribly wrong. At the beginning of the 20th century, wood carver Colton Kemp, who lives in the small town of Marumaru and carves mannequins for store windows, has just become the widower father of twins after his wife died during childbirth. Kemp is inspired by Eugen Sandow, the real-life German father of modern bodybuilding, to raise his children to become mannequins to thwart his rival, known as “the Carpenter.” Raised in isolation and trained in the Sandow method of diet, exercise, and muscle control, the twins, Avis and Eugen, learn to hold poses for hours, preparing for their store-window debut. The novel unfolds in four parts, covering a span of time from 1859 to 1974. First, readers see how Kemp is galvanized both by his wife’s death and the incredible feats of strength and control he observes in a Sandow performance. In the second part, Avis’s diary reveals the painstaking routine she and her brother endure, and the odd perspective about life and relationships developed in their sequestered environment. In the third, readers are regaled with incredible adventures at sea as the Carpenter, who has lost his voice, gives Avis a written account of how a young carver in Scotland ended up in a small New Zealand town. In the final part, Eugen, now in his 70s, fills in the blanks, revealing the cataclysmic events that followed their appearance in the store window. This is a spellbinding and original tale, rife with perilous journeys, fascinating historical detail, and memorable characters. (Nov.)
close
Details