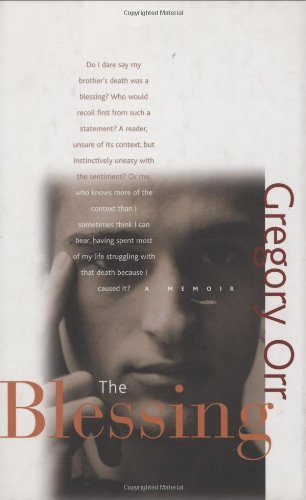 THE BLESSING: A Memoir

Orr's gripping chronicle of his troubled boyhood is alternately self-conscious, moving and revelatory. When he was a boy growing up in New York's Hudson River valley, Gregory accidentally shot and killed his younger brother Peter during a hunting excursion with their father, a philandering, amphetamine-addicted country doctor. Now in his fifties, Orr examines the corrosive effect of that loss on his parents' marriage, the divine purpose of such loss, his destiny and the reason for his own survival amid a series of misadventures, which include the family's sudden relocation to rural Haiti and Orr's harrowing participation in civil rights activities in Mississippi in 1965. Upon Orr's return from the Deep South, where he was imprisoned by local authorities, his high school English teacher took him for a walk through the David Smith fields near Lake George. Smith, the great American sculptor who had just died in a car accident, filled the fields in Bolton Landing, N.Y., with gigantic metal sculptures. Orr saw in them images of his own "martyr's cross... alchemized and shining, metamorphosed... into a hundred expressive shapes.... Here was my blessing." And there, a writer was born. Orr's understanding of the tragic events of his life through the prism of art allows him to find serenity and stability (a well-published poet, Orr currently edits the ). One can only wonder what the next installment of Orr's life will look like on paper, for this one never fails to entertain, mystify and surprise.