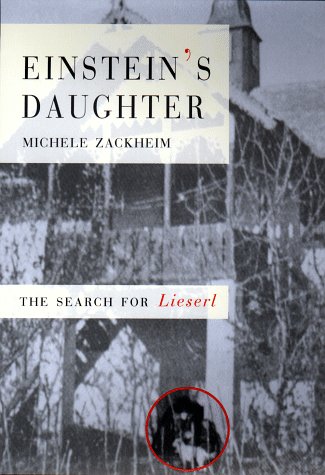 Einstein's Daughter: The Search for Lieserl

In 1986, Albert Einstein's granddaughter discovered a cache of love letters by the physicist and Mileva Maric, the Serbian woman who became his first wife. The letters disclosed that the couple had a daughter named Lieserl, born in 1902, a year before they married, but all traces of this infant daughter--hitherto unknown to biographers--disappear after 1903. What became of Lieserl? Scholars have assumed that she was put up for adoption, but Zackheim, who went to Serbia and Germany to comb archives and to interview the Einsteins' surviving relatives, neighbors and associates, believes that Lieserl was born with a severe mental handicap and died of scarlet fever in infancy. Her thesis is intriguing but inconclusive, based on only a few witnesses' recollections. Writing elegantly, Zackheim does establish that Lieserl lived with Mileva's parents, and her remarkable sleuthing turns up new details of Einstein's personal life. In her withering, one-sided portrait, the great physicist, pacifist, freethinker and internationalist was a dictatorial, insulting, selfish, unfaithful spouse, a curmudgeon with a misanthropic streak. Einstein, by this account, emotionally abused his ailing first wife and virtually abandoned their two young sons after he divorced Mileva in 1919 so that he could marry his cousin Elsa five months later. Zackheim paints Einstein's second marriage as one of mere convenience, portraying him as a cold, distant mate, ""a middle-aged Lothario"" who ""tended to have a few romances going at once."" She also speculates, without evidence, that Einstein may have infected Mileva with syphilis, and that she could have passed it to Lieserl in utero, increasing the risk of mental retardation. (Nov.)
close
Details