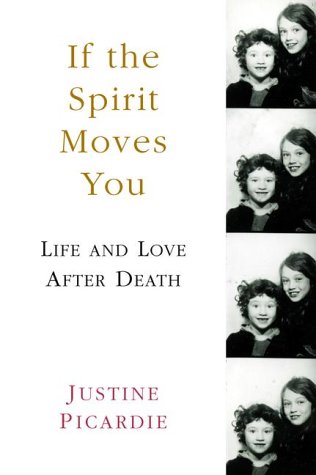 IF THE SPIRIT MOVES YOU: Life and Love After Death

As an editor at London's , Picardie hired her younger sister, Ruth, to write a series of columns chronicling her personal experiences with breast cancer. After submitting only a few essays, Ruth, the mother of two-year-old twins, died at age 33. Justine and Ruth had been exceptionally close, and here the surviving sibling offers diary entries from her own year of mourning between Good Friday 2000 and Easter Sunday 2001. Picardie is no stranger to death, undergoing an unusual number of losses through illness, accident and suicide, and this excess—along with her deep grief over her sister's death—leads her on a quest for answers to one of life's most basic mysteries: "Where do the dead go?" Missing Ruth terribly, Picardie realizes, "I didn't expect silence," and begins watching for signs and messages. Urgently seeking communication with "the other side," Picardie visits "spiritualists," scientific researchers and inventors of electronic machines that claim to record the voices of the dead. With obsessive hope and healthy skepticism, Picardie haunts the Internet, flies halfway around the world to a conference of psychic mediums and studies Freud and Jung's unpublished correspondences. She describes her dreams of Ruth and arguments with her rational "imaginary therapist." Frustrated with Ruth's silence, the author reveals the mourner's secret fear that "she doesn't love me anymore; she doesn't want to talk to me." Originally published by Macmillan in Great Britain, this well-told tale is a deeply touching, intellectually captivating investigation into the elusive nature of love and death.