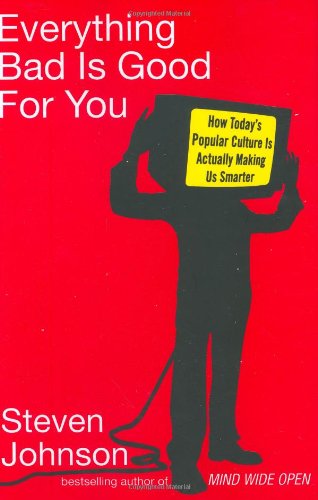 EVERYTHING BAD IS GOOD FOR YOU: How Today's Popular Culture Is Actually Making Us Smarter

Worried about how much time your children spend playing video games? Don't be, advises Johnson—not only are they learning valuable problem-solving skills, they'd probably do better on an IQ test than you or your parents could at their age. Go ahead and let them watch more television, too, since even reality shows can function as "elaborately staged group psychology experiments" to stimulate rather than pacify the brain. With the same winning combination of personal revelation and friendly scientific explanation he displayed in last year's , Johnson shatters the conventional wisdom about pop culture as pabulum, showing how video games, television shows and movies have become increasingly complex. Furthermore, he says, consumers are drawn specifically to those products that require the most mental engagement, from small children who can't get enough of their favorite Disney DVDs to adults who find new layers of meaning with each repeated viewing of . Johnson lays out a strong case that what we do for fun is just as educational in its way as what we study in the classroom (although it's still worthwhile to encourage good reading habits, too). There's an important message here for every parent—one they should hear from the source before savvy kids (especially teens) try to take advantage of it.