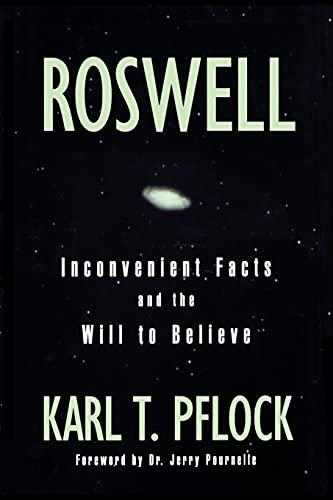 ROSWELL: Inconvenient Facts and the Will to Believe

UFO researcher Pflock has written the definitive book on facts and fantasies surrounding the now-familiar series of 1947 events at Roswell, N.Mex., interpreted by many as an air force coverup involving extraterrestrial bodies at a UFO crash site. Over the years, in the fashion of urban legends, a modern mythology has developed around Roswell, providing fuel for TV movies, feature films, TV series and a full shelf of books, along with UFO museums and annual celebrations that bring tourists to the town. A New Mexico resident and former believer, Pflock offers exhaustive research, spanning eight years, a fascinating probe that has transformed him into a skeptic. With photos, drawings and interviews, Pflock focuses on secret high-altitude balloon research conducted for the U.S. Army Air Force by New York University in 1947. These balloon trains, taller than the Washington Monument, were launched from Alamogordo Air Force Base, 90 miles southwest of Roswell. Assembling formerly classified documents, along with 1947 United Press wire transmissions, weather data and 28 witness affidavits, Pflock attempts to refute past "witness" tales, expose claims made by other books on this subject and prove the U.S. government has no physical evidence. He has succeeded at this in a major fashion, creating an unusual and authoritative study. As Pournelle notes: "This is a courageous and important book." Many who come to it will be persuaded that it cracks the mystery, wipes the slate clean and exposes the hullabaloo about Roswell as nothing more than a fabulous fairy tale, peaking in a delightful paragraph that tracks the famed purple-pink "alien hieroglyphics" to a novelty company on New York City's Canal Street.