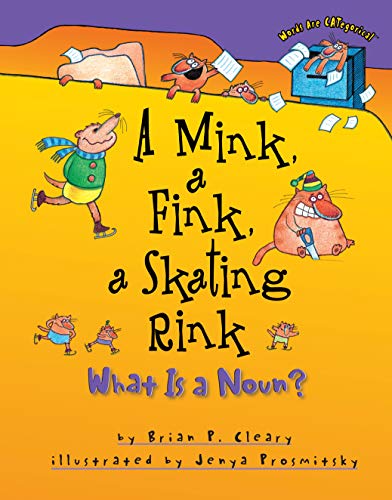 A Mink, a Fink, a Skating Rink: What is a Noun?

While this book may appear to be little more than a list of nouns, the witty zeal it brings to the task of enumeration makes this basic concept seem like plenty. Cleary indulges his fondness for wordplay (evident from such previous titles as Give Me Bach My Schubert) in the humorous, wide-ranging subjects that show up in the text, its cadences reminiscent of jump-rope songs: ""If it's a train, or brain, or frown,/ It's elementary--it's a noun""; ""London, Levis, Pekinese--/ Proper nouns name all of these."" Colored type highlights the nouns within the verse, which winds around the pictures in a bouncy typeface. For her first children's book, Prosmitsky introduces a cast of goofy-looking cartoon cats with round bodies and giant, flaccid noses. The challenge of illustrating such a random list results in gleeful, nearly nonsensical scenes: the two images for the lines ""The pope, some soap that's on a rope,/ A downtown mall, a downhill slope"" show a small black cat, rigid with fear, getting soaped up beside a portrait of the pope on the shower wall juxtaposed with a snowscape of cats and their bags sliding down a slope after shopping. Certainly one of the least serious grammar lessons imaginable, this book will convince kids that nouns are everywhere. Ages 7-9. (Sept.)
close
Details