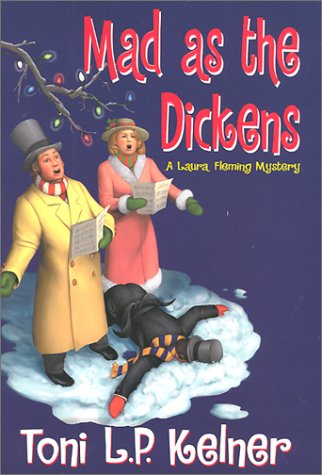 MAD AS THE DICKENS: A Laura Fleming Mystery

The seventh in this lightweight cozy series (, etc.) brings amateur sleuth Laura Fleming back to her hometown of Byerly, N.C., where once again murder and mayhem prevail. Five months pregnant, Laura, an MIT graduate and computer programmer, and her English professor husband, Richard, had planned on spending a quiet Christmas at home in Boston until a call came from Laura's cousin, Vasti, who begged Richard to come down to help put on a play version of Dickens's . What begins as the fulfillment of Richard's dream to be a director soon becomes a nightmare when a series of practical jokes turns dangerous and the actor playing Scrooge gets murdered. In spite of his death, members of his family decide the show must go on. Laura and a vacationing police chief join forces to investigate the crime. Petty conflicts between the two sleuths on how this is to be accomplished almost overshadow the dramatic and well-done conclusion that unmasks the murderer. Constant reference to the raging hormones of the pregnant Laura, the cliché words of advice from doting aunts and new young mothers, the childish competition between Vasti and the town social climber (who are each vying for a place in the Junior League), eccentric moonshiners, and Richard's frequent quotes from Dickens that fall on deaf ears, all make the reader rejoice that Byerly is a fictional town. While sure to charm Kelner fans, this will have little interest for more serious crime fiction devotees.