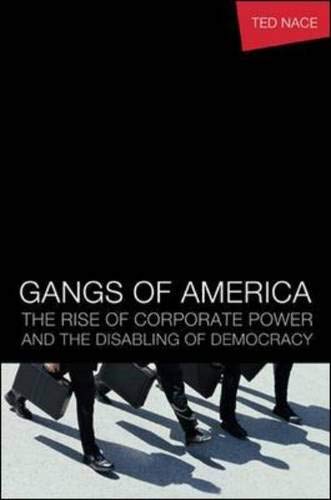 GANGS OF AMERICA: The Rise of Corporate Power and the Disabling of Democracy

Nace nurtured Peachpit Press from a home-based operation, writing and publishing computer guides, to a business worthy of acquisition by the Pearson conglomerate. The experience inspired him to study the nature of corporate power. He offers a breezy summary of the legal history surrounding the formation of corporations and the parameters of their power, putting an anti-corporate spin on the American Revolution and discussing how the early republic limited corporate power by enabling state governments to issue restrictive charters. But the tight controls didn't remain in place: after the Supreme Court's decision in an 1886 case involving the Santa Clara Railroad, corporations were assumed to be the legal equivalent of people entitled to equal protection under the law and, in subsequent cases, were guaranteed a growing range of constitutional rights. One of Nace's central arguments is that Santa Clara doesn't mean what everybody thinks it means: the original decision doesn't take any stand on whether corporations have constitutional rights; the question comes up in a subsequent version of the decision, but the Chief Justice acts as if it had been resolved in earlier decisions. Although Nace blames the Court's reporter for the shift in emphasis, he illustrates how another justice, Stephen Field, was already buttressing politicians' and financial titans' efforts to eliminate all restraints on corporate power, making their legal supremacy inevitable. Later chapters examine how corporations continue to wield their influence to prevent the government from regulating them too closely, but while the book offers plenty of details about the problem's existence and deftly introduces it, it offers little more than generalities about where to go from there.