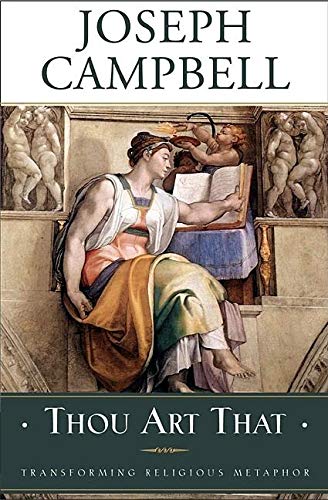 THOU ART THAT: Transforming Religious Metaphor

This collection of essays, lectures and discussions will delight both avid Campbell disciples eager for more of his thoughts and newcomers to his work on comparative mythology and religion. It is also a quick refresher course on some of Campbell's ideas about the Judeo-Christian tradition for those who have encountered him in his well-known or in his popular television series on the power of myth with Bill Moyers. This is not the polished writing of a scholar systematically presenting an argument. Rather, editor Kennedy urges the reader to approach this collection "as one would the classroom, or the study" in order to better enjoy the more energetic and spontaneous "master teacher" side of Campbell. The effect is to take the reader on a romp through the Judeo-Christian tradition—a lightning-paced tour with an extremely knowledgeable and provocative guide to illuminate some intriguing, untrammeled paths. The most abiding theme of this collection is that Western religious traditions have suffered from taking their stories and symbols literally instead of metaphorically. Some chapters are dense with ideas and call for careful reading, while other sections are breathtakingly clear in describing mind-opening concepts. In either case, this is a book that will stretch readers to reconsider their interpretation of the stories and symbols of faith and the relationship between personal spirituality and institutional religion.