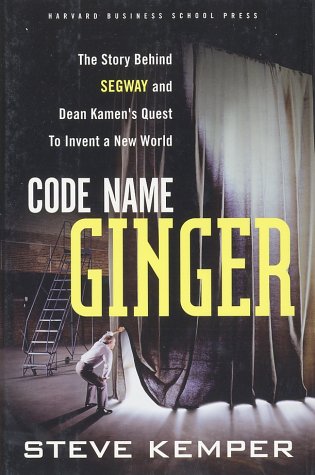 CODE NAME GINGER: The Story Behind Segway and Dean Kamen's Quest to Invent a New World

When, in 1999, journalist Kemper started following the efforts of Dean Kamen to invent a new type of transportation device, he could hardly have known the story would turn out to be at once enormous and tiny. Kamen, inventor of the über-hyped Segway (a two-wheeled scooter with an impressive self-balancing system), was already wealthy from earlier inventions (e.g., portable dialysis machines, drug-infusion pumps) when he set his boutique engineering firm to work on the Segway (or "Ginger"). Shrouded in secrecy from the beginning, the project quickly took on a messianic quality, with Kamen proclaiming Ginger would be the primary mode of transportation in a decade. The combination of a cool, mysterious new toy with the timing of the late years of the Internet gold rush created a venture capital feeding frenzy, with figures like Steve Jobs and Jeff Bezos clamoring to be a part of project Ginger. Kemper's rigorously fair-minded book, which gives all due credit to Kamen and his team, also records Ginger's endless delays, brought about by what he casts as a mixture of Kamen's egomaniacal hubris and his company's inability to think in practical terms (the project was shockingly far along before anyone considered what state regulators might think of the new vehicles that would soon vie for space on sidewalks). The last act is well known. Kemper's book proposal gets leaked and a media circus swirls around the secret world-changing project, only to collapse in a welter of "That's it?" disappointment. The result is a book that is eye-opening and heartbreaking.