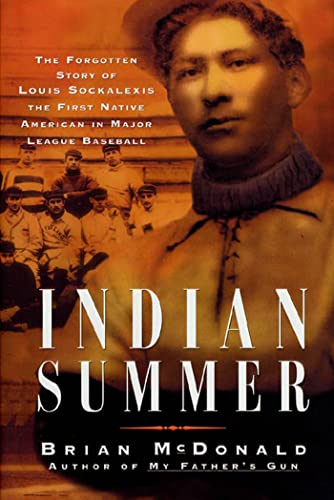 Louis Francis Sockalexis, a full-blooded Maine Penobscot, played but a half-dozen seasons of professional baseball in Cleveland in the late 1890s. His professional statistics are spectacular, but anecdotal on the whole and ultimately too few for McDonald to really elevate "Sock" into baseball's pantheon or that of Native American athlete Jim Thorpe. Likewise, Sockalexis is not so much "forgotten" as he is faintly recorded. Biographic sources on his life apparently were frustrating and few, especially for his early reservation life before he became a student athlete. McDonald () is forced to backlight his primary story with such narrative devices as parallel news stories on Native American relations with the U.S. during this time, and his story gets stretched too thin. Still this is rich material, and MacDonald handles what he knows from the records with style and skill, creating a turn-of-the-century baseball story that follows a disturbingly modern tragic arc for minority athletes. Sockalexis was discovered in amateur leagues by a Holy Cross College scout and offered what must have been one of college athletics' first scholarships; a financial arrangement took him to Notre Dame; then he was drafted by the Cleveland Spiders of the burgeoning National League. From that point, McDonald reports with restraint how Sockalexis's sense of privilege in the white man's world rapidly overwhelmed him until his boozy ignominious finish in the New England minors. Baseball romantics will enjoy this tantalizing but shrouded and spare story about the man in whose honor the Cleveland Indians renamed their team.