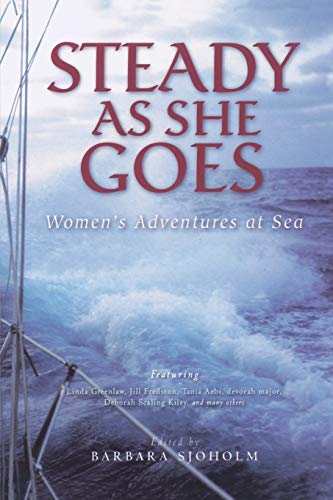 STEADY AS SHE GOES: Women's Adventures at Sea

This collection of salty yarns by and about women who sail calls itself the first of its kind. Most of its stories, like Deborah Scaling Kiley and Meg Noonan's gripping "Survival at Sea" and Penelope S. Duffy's "Big Storm, Small Boat," are adventure tales set on the ocean at its angriest and most dangerous. Other selections give a fascinating glimpse of the women who make their living on boats. Linda Greenlaw () writes about the daily rituals aboard the in her fishing story, "Swordfish." Like the other authors represented here, Greenlaw writes as though she sees herself as a captain first, a woman second. She's at ease with her place of authority in a world dominated by burly men, and her minority status shows only in passing, with, "Fishing gear manufacturers don't make gloves small enough for women, so I use ladies' gardening gloves." Other highpoints include Jessica DuLong's stylish "Below Decks," tracing her lifelong enthrallment with mechanical doodads, from her father's auto shop to the diesel-powered , a retired fireboat on which she's a crew member plying the Hudson River, and Jennifer Karuza Schile's story of her fishing family, "Happy Jack and the Vis Queens." Not all selections are as strong as these, and some are fairly amateurish. Still, the anthology should find a readership among the many fans of maritime nonfiction.