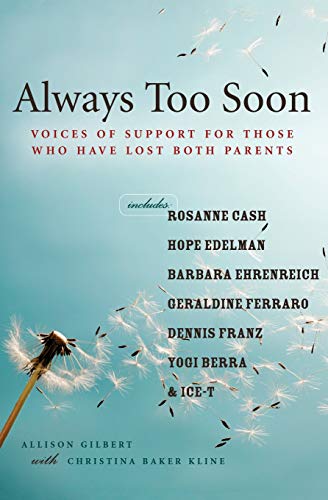 Always Too Soon: Voices of Support for Those Who Have Lost Both Parents

For this compilation, Gilbert, a producer of CNN's interviewed 20 men and women—from the ordinary to celebrities like Ice-T and Yogi Berra—who have lost both parents. The collected short memoirs are all quite moving, though the interview style leads to some pedestrian prose. The contributors' experiences vary widely. Barbara Ehrenreich's father died of Alzheimer's; her mother's premature death may have been a suicide, and she discusses the sadness that overwhelmed her in contemplating her mother's unfulfilled life. In a tragic story, journalist Jeff Gelman tells how, when he was 14, his parents were killed by a drunk driver. Singer Shelby Lynne's father shot her mother and then turned the gun on himself when Lynne was a teenager. Catheryne Ilkovic Morgan's peaceful childhood in Czechoslovakia ended when the Nazis invaded and she subsequently lost both her parents at Auschwitz. Now 76, Morgan comments that time does not heal, but that her greatest joy is to see the future generation. These stories of bereavement and consolation will strike a chord with those who have lived through the deaths of one or both parents.