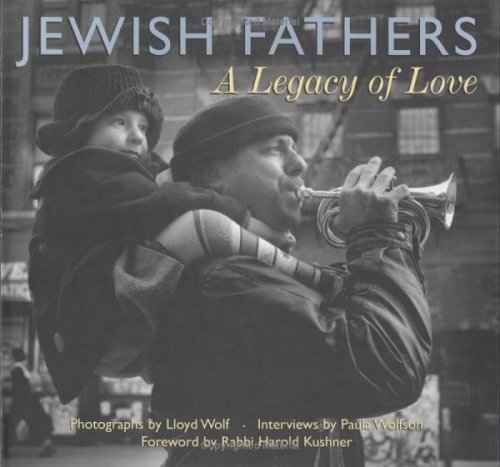 JEWISH FATHERS: A Legacy of Love

Four years ago, Wolfson, a licensed clinical social worker, teamed up with photographer Lloyd Wolf to produce . To provide balance, they now offer a companion volume on Jewish fathers. Their format is straightforward: 44 fathers were interviewed and photographed, and each one speaks for himself about his life and his experiences as a parent. These presentations tend to be autobiographical, often emphasizing activities and achievements that have nothing to do with fatherhood. Theodore Bikel, Stuart Eizenstat and Senator Carl Levin are among the celebrities who talk more about their own careers than about being a father. More space is sometimes given to the interviewee's relationship with his own father than with his children. The men selected for inclusion cover a wide range: observant, non-observant, single fathers, divorced, gay, converts, immigrants, inter-married, rural, urban, famous and obscure. What unites them is that each is a , a man of rectitude and dignity who is "an upright, trustworthy person." A motif that runs throughout the book is the determination of most of the fathers to preserve Jewish continuity. Rabbi Shmuel Simenowitz, who runs a kosher, organic maple sugar farm in Vermont, tells the most unusual story. He uses draft horses for power and carefully observes the Sabbath, following intricate rules, thus setting an example for his children. Jewish sons and daughters will find that this book, which points to the diversity and dedication of Jewish fathers, makes an ideal Father's Day gift.