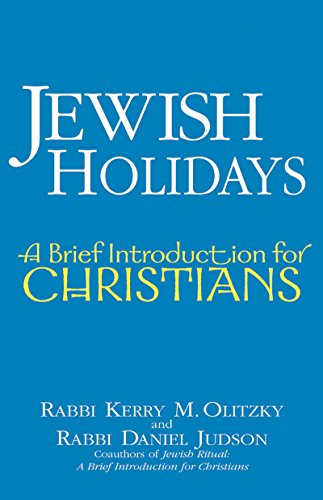 In this sequel to , rabbis Olitzky and Judson aim for a very specific audience: Christians who want to learn more about Judaism. The authors lay out the basics of each major holiday, explaining why Jews blow a shofar (ram's horn) on Rosh Hashanah, fast on Yom Kippur, refrain from eating leaven during Passover and commemorate the agricultural calendar during Sukkot. The authors also point out parallels between Christian and Jewish observances, discussions that help distinguish this book from introductory guides to Jewish holidays written for a broader readership. They note, for example, that the carnival atmosphere of Purim is similar to Shrove Tuesday, and they point out the relationship between Pentecost and Shavuot. In the chapter on Passover, Olitzky and Judson thoughtfully and delicately address why "historically Christian-Jewish tensions were exacerbated around Passover and Easter, making this a time of heightened danger for Jews." Curiously, they overlook some obvious parallels (for example, they don't connect Simchat Torah with the first day of Advent, when liturgical Christians start a new year's lectionary readings). All in all, the book could be a little longer and more fully fleshed out. Still, it is a helpful guide, and will be especially useful for interfaith families.