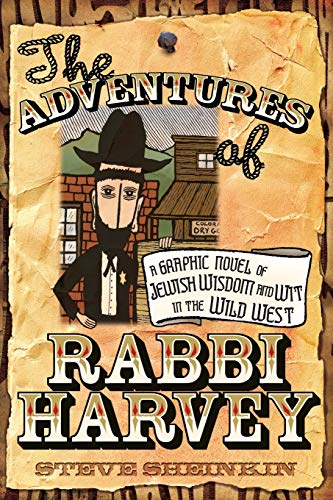 The Adventures of Rabbi Harvey: A Graphic Novel of Jewish Wisdom and Wit in the Wild West

Sheinkin's tales of Rabbi Harvey, wisest in the Wild West, are not quite the fish-out-of-water yarns you might expect. That's mainly because, despite the setting (the fictitious town of Elk Spring, Colo., circa 1870), nearly everyone he encounters is also a Jew; one verifiable gentile appears in the whole book. Transplanting Talmudic wisdom and Jewish folktales into the Old West without a sense of cultural contrast lessens some of the obvious humor. Luckily, Harvey himself is such a genial character—and these stories are so timeless—that the book's central conceit is rendered a moot point. While morality can be a tough pill to swallow, Harvey's adventures are so much fun you hardly realize you're learning anything until it's too late. Harvey is always on his toes, and in the tradition of great Jewish humor, self-deprecating one-liners and deadpan delivery abound—as do jokes about food. The stories are told in a standard comic-strip format, and the cartoonish art is endearing without being the least bit adventurous (experiments in wood-grain illustration notwithstanding). Kids of all ages will love Harvey's sugary wisdom and wit.