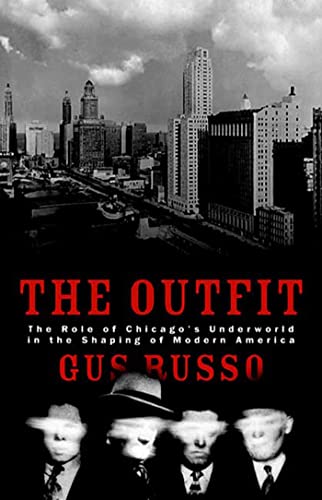 THE OUTFIT: The Role of Chicago's Underworld in the Shaping of Modern America

Investigative reporter Russo () offers an impressive in-depth history of Chicago's elusive crime syndicate. Unlike their trigger-happy East Coast counterparts, Chicago's gangsters stressed businesslike discretion following the chaotic Capone era, and they had a wide-ranging impact on American culture, entertainment and politics that has never been fully documented. Russo has new sources, ranging from entertainer Steve Allen's "crime files" to the widow of the book's most memorable figure, the Outfit's financial manager, "Curly" Humphreys. Others, like Paul "The Waiter" Ricca, will be known to Mob aficionados, but even they will note Russo's novel thesis, that the lucrative scams carried out during the group's 40-year heyday involved members of the respected "upperworld." These ventures ranged from the well known, such as the gambling operations that fueled Chicago's civic corruption, to the surprising (Mob-linked dairies were the first to use "sell by" dates). The Outfit started off-track betting and Top 40 charts and, in its declining years, the Outfit's "fixer," Sidney Korshak, vetted the cast of . According to Russo, their "respectable" partners—who publicly abhorred the gangster element—included Joe Kennedy, MCA president Jules Stein, Bing Crosby, Presidents Roosevelt and Truman, and innumerable public servants. Russo humanizes the shadowy gangsters without denying their violent proclivities. He also examines them in the context of traditional immigrant ambitions. Russo's illuminating history may disorient some readers; still, this is the book to beat in examining this midcentury criminal empire. B&w photos not seen by .