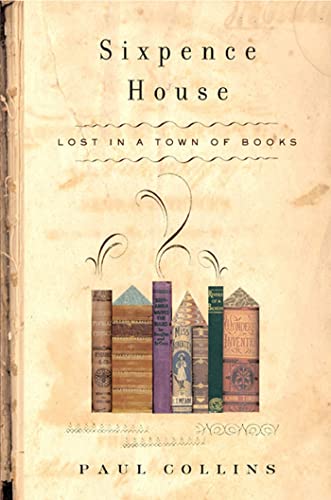 SIXPENCE HOUSE: Lost in a Town of Books

Hay-on-Wye, a Welsh town of 1,500, is heaven on earth for people who love books, especially old books. It has 40 bookstores, and if you can't find what you want in one of them, you can fork over 50 pence and visit the field behind the town castle, where thousands more long-forgotten books languish under a sprawling tarp. contributor Collins moved his wife and baby son from San Francisco to Hay a few years ago, intending to settle there. This book is Collins's account of the brief period when he organized American literature in one of the many used-book stores, contemplated and abandoned the idea of becoming a peer in the House of Lords, tried to buy an affordable house that wasn't falling apart (a problem when most of the buildings are at least a century old) and revised his first book (). Collins can be quite funny, and he pads his sophomore effort with obscure but amusing trivia (how many book lovers know that the same substance used to thicken fast-food milk shakes is an essential ingredient in paper resizing?), but it's hard to imagine anyone beyond bibliophiles and fellow Hay-lovers finding enough here to hold their attention. Witty and droll though he may be, Collins fails to give his slice-of-life story the magic it needs to transcend the genre.