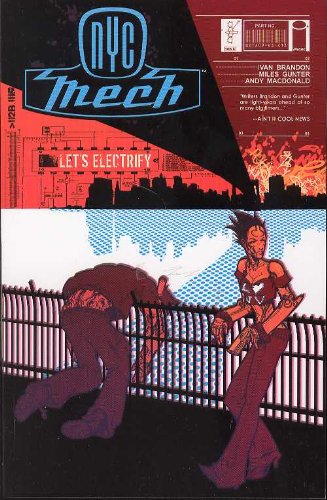 In the underbelly of New York City, the strong rob the weak and the rich play at being heroes. But this New York is inhabited solely by robots—robots that think, act and feel just as we do. This first collection contains two stories of hope and desperation. In the first, a gang of punk robot thugs commits armed robbery as much for the thrill as the meager take. Unfortunately for them, they've sown the seeds of their own annihilation. In the second, a trust fund baby pretends to be a cop so his fashion model sister will be proud of him. But though he can play the tough guy to shake down drug-dealing teens and penny ante hookers, when the city is plunged into a blackout, he is unready to be a real hero. While the stories are satisfying enough, this book owes its narrative structure and gritty style to Frank Miller's comics, but doesn't dare to tell such unconventional stories. Where the book excels is with MacDonald's art, which captures an off-kilter, stylized world of mecha-humans. has the potential to break new ground, but it hasn't strayed yet from the tried and true.