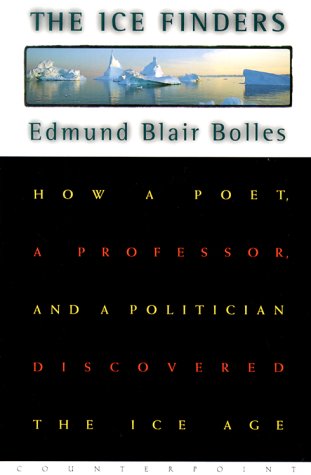 The Ice Finder: How a Poet, a Professor, and a Politician Discovered the Ice Age

This is an entertaining, often irreverent, history of the scientific discovery of the Ice Age. Bolles is fascinated by the way in which scientific knowledge advances. He challenges the notion that it proceeds in a rational and orderly manner, always building on previous knowledge. People, he claims, ""learn unsuspected things, pulling knowledge, like rabbits, from empty hats,"" and often, convincing scientists of a new idea is more a matter of politics than of science. As an example of this theory, he weaves together the biographies of three important players in the great Ice Age debate. Bolles focuses on Louis Agassiz, the naturalist who first theorized the Ice Age in 1837, but was unable to persuade the scientific community to accept his findings for almost 20 years. Second is Elisha Kent Kane, an adventurer and poet whose report on his journey to the north of Greenland in the 1850s provided the popular imagination with the vision of immense seas of ice at the Pole pouring great rivers of ice into the Atlantic and Greenland seas. Finally, Bolles writes of Charles Lyell, the great Scottish geologist whose book The Principles of Geology ignored the possibility that glaciers were capable of changing the earth's surface, and who resisted the notion of the Ice Age for many years after Agassiz had theorized about it. A master politician among his colleagues, once he was convinced of the theory, it became more widely accepted. Bolles claims that it was only the interaction among these three individuals, and many others who are mentioned in passing, that led to a lasting new understanding of the world in which we live. (Dec.)
close
Details