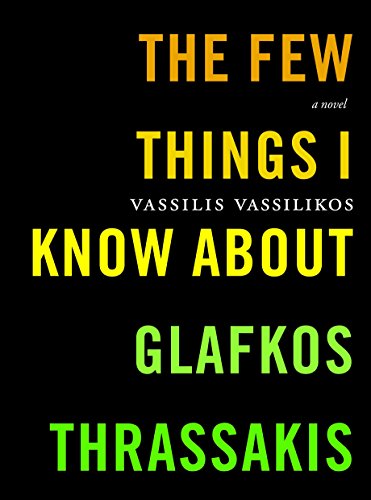 The travails of a literary biographer are the subject of this playful, dense patchwork of a novel by the esteemed and prolific Greek writer best known for his 1967 novel . Reworked over a period of decades and further amended for the English edition, the novel satirizes various aspects of literary and political life in Greece over the last 75 years. In the whimsical, cheekily morbid opening chapters, the unnamed biographer-narrator outlines the story of fictional, pseudonymous Greek writer Glafkos Thrassakis. Thrassakis's controversial work forced him into exile, where he was finally devoured by cannibals on a remote island in Papua New Guinea. So far so good, but the novel loses ground when some of Thrassakis's lost manuscripts are discovered, which leads to a long, uninteresting middle section in which the narrator launches into an in-depth retelling of his subject's stories. The third-hand perspective drains the energy from the narrative, and Vassilikos's attempts to get things going again in the final chapters are only fitfully effective as he describes Thrassakis's various conflicts with the government and his legacy in the world of Greek letters. Vassilikos is an engaging, literate writer whose ironic humor emerges at unpredictable intervals, and he offers intriguing observations on the Greek experience of World War II, the country's civil war and its 1967–1974 military dictatorship. But the uneven structure and the long-winded treatment of Thrassakis's work reduces the effectiveness of this elegantly written (and pristinely translated) satire.