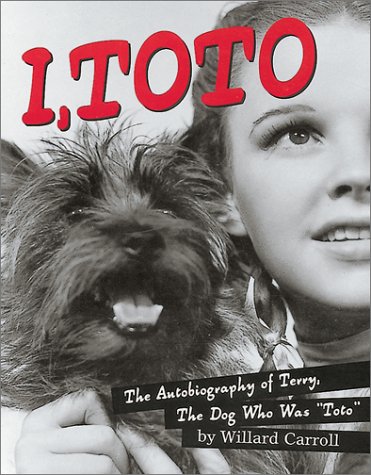 I, TOTO: The Autobiography of Terry, the Dog Who Was "Toto"

"I don't mean this to sound full of myself—but this story? It's all about me!!! I'M IN ALMOST EVERY SCENE IN THE PICTURE!!!" A leaf from Judy Garland's long lost diary? Secret tapes of a Munchkin? No, it's the original diary of Terry, the dog who played Toto in the classic 1939 MGM film. Writing in plain, even humble prose (although she describes her part as vital and her performance as flawless, she understands that Judy Garland was the star of the film), Terry also reveals the grueling before-scenes enemas, snafus on the set and the great difficulty of playing a scene with flying monkeys. A curious cross between trivia, a parody and a chronicle of Terry's actual career (she made 14 movies and worked with Shirley Temple, Spencer Tracy and Joan Crawford), this entertaining and fanciful "diary" also reveals intriguing facts about the economics and mechanics of training animals for films and, specifically, the career of Carl Spitz, Terry's manager and one of the most respected animal trainers in the business. While Carroll, a fan, is not as overtly clever or deliciously mean-spirited as Patrick Dennis, the author of , the classic 1961 parody of star autobiographies, he isn't debilitatingly fawning, either. This fun little tome should both amuse and please dog lovers, as well as fans of and collectors of Hollywood arcana.