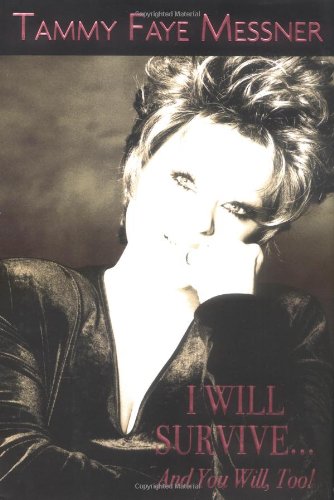 I WILL SURVIVE AND YOU WILL, TOO!

Best known for her marriage to Jim Bakker and work developing several Christian television networks, Messner here offers her philosophy on life in a breezy, conversational fashion. She's now happily remarried, but still bears the scars of the scandal with Bakker, who went to prison over charges of mail fraud; their marriage culminated in divorce and financial ruin. However, she exults in being a survivor and believes that others, especially women, can benefit from her advice. Messner discusses makeup, love of shopping, weight loss, children and more. Only a few pages examine the end of her marriage to Bakker and the scandal over criminal activities, though Messner asserts her and her ex-husband's innocence: "We lost PTL and Heritage USA because another minister propagated lies about us and our ministry, and the media saw an opportunity for a huge story and ran with it. As hard as we tried, we did not have the money to fight the case against us. The lies had somehow become truth in people's minds...." She goes from past to present, recalling her childhood and her work building several Christian televangelical networks. Some of her advice is sound. "Be careful," she warns. "The people I most trusted have most betrayed my trust in them. And believe it or not, it was usually over money... money is soon gone, and you have lost something so much more important than money when you lose a good friend." Other times, she's silly and frivolous, apparently unintentionally: "I think almost every woman should own a wig. It makes every day a good hair day." Fans of Tammy Faye will relish this book, admiring her ability to endure tough times. However, many readers may find it hard to take her seriously.