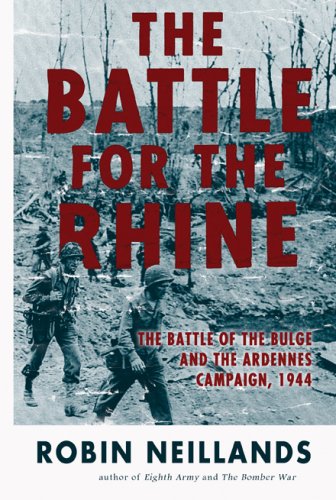 The Battle for the Rhine

British historian Neillands, who died in January 2006, enthusiastically affirmed British military performances in the World Wars just as Stephen Ambrose heralded the "greatest generation." Here, he reopens the long-simmering controversy on command and strategy in the post D-Day campaign, asserting that Dwight Eisenhower may have been a "superb" supreme commander, but was "frequently lamentable" as a field general. Neillands particularly indicts Eisenhower for failing to understand the challenges to his broad-front strategy, and for failing to control George Patton and Omar Bradley. He describes U.S. policy as shaped by determination to control a campaign our resources dominated, and a near-toxic Anglophobia manifested in an enduring prejudice against British Field Marshal Bernard Montgomery. Monty is, predictably, Neillands's hero, whose single-thrust concept promised better results than Eisenhower's diffused efforts, and whose understanding of modern war marked him as a professional among American amateurs—Patton included. His difficult personality obscures the fact that he obeyed Eisenhower more loyally than Ike's own countrymen, Neillands argues. Montgomery emerges as a near-martyr to the Anglo-American alliance—an image sharply at variance with his own account of events. Despite constant praise of American GIs, Neillands's revisionist interpretation is likely to generate more heat than light—especially without providing significant new evidence.