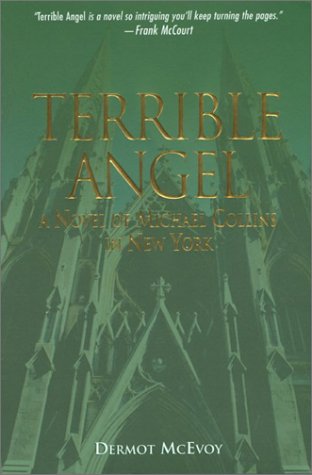 TERRIBLE ANGEL: A Novel of Michael Collins in New York

The great tradition of Irish-American literature welcomes a bright new light with this stunning first novel. Michael Collins is, of course, the Irish revolutionary/terrorist who created the IRA and negotiated the peace treaty with the British that gave rise to the Irish Free State; in 1922, only 31 but already head of state, Collins was killed by rebel forces. In this colorful, suspenseful and moving reimagination by McEvoy, a contributing editor, Collins awakens in Heaven after 70 years in Purgatory to be handed a task that will determine his soul's final fate: God, with Michael the Archangel as his intermediary, orders Collins to go to Manhattan to spring from behind bars one Martin Twomey, falsely accused of terrorism and about to be extradited to Britain to stand trial; the hitch is that Collins must not use violence to free Twomey. In New York, Collins makes contact with several IRA sympathizers, confronts several enemies—most notably a corrupt NYPD detective and the sadistic head of MI-5's Belfast Division—and taking inspiration from a common street scam, hatches a clever plan. McEvoy's meticulous depictions of the city's neighborhoods and characters reveal a deep knowledge and love of Gotham, and provide strong grounding for the story's fantastic elements; the salty, witty dialogue expertly sparks the narrative as it surges toward its satisfying conclusion. Most impressive is the author's rich portrayal of Collins, here neither saint nor devil but a flawed, good man struggling to do right without resorting to bloodshed. In Collins's heartfelt, necessarily brief affair with a Jewish bartender, McEvoy captures the poignancy of human temporality; he evokes, in a voice as fresh as sea spray, the indomitable romance of the Irish spirit.