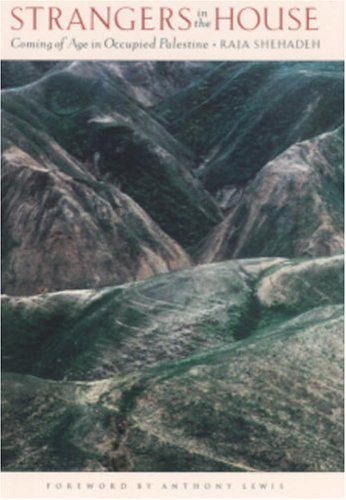 STRANGERS IN THE HOUSE: Coming of Age in Occupied Palestine

Palestinian perspectives on the Middle East conflict don't often reach the West—and today they are more relevant than ever. In this fascinating memoir, leading Palestinian lawyer Shehadeh offers a chilling and moving view of life inside the Occupied Territories. He was born into a prominent family around the time of Israel's establishment in 1948. As Shehadeh recounts his relationship with his parents, his first love, intellectual experiments in college, world travels, law career and human rights work, his struggles under Israeli occupation distinguish his story. Shehadeh names his father, Aziz, also a prominent attorney, as the first Palestinian in the late 1960s to advocate recognizing Israel and adopting a peaceful two-state solution. The author gives a gripping narrative regarding Aziz's murder and the Israeli authorities' sluggish investigation; it's widely assumed that Aziz's killer was a Palestinian who disapproved of his willingness to compromise with Israel. More broadly, Shehadeh deftly renders the Israeli government's systematic harassment and humiliation of the Palestinians, ranging from constant surveillance at checkpoints to random searches in homes and offices. Such situations, Shehadeh makes clear, account for the powerlessness, frustration and anger experienced by most Palestinians. His deliberate analysis of the expansion of Jewish settlements in the Occupied Territories, a major obstacle to the peace process, is especially intriguing. The author argues that these settlements are illegal under international law, but have slowly and surely been aligned with Israeli legal statutes. Anyone seeking a nuanced view of Palestinian experience should read this brave and lyrical book. B&w photos.