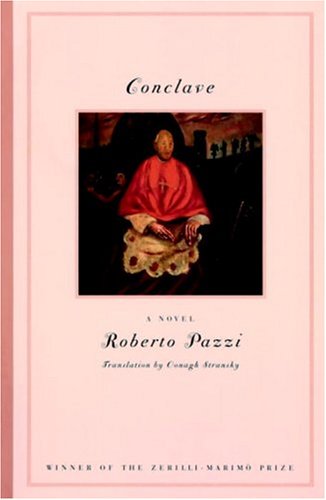 A rodent infestation of biblical proportions overcomes the Vatican City at the start of this hilarious, sophisticated new novel by renowned Italian poet and novelist Pazzi (, etc.), just as cardinals from around the world are assembled in an isolated conclave at the Vatican to choose a new pope. While different factions plot to elect their own favorite or political ally, a limousine with Vatican diplomatic plates cruises Rome's seedy alleyways searching out the solution to the rat problem—the Eternal City's notorious feral cats. But what will happen when they can no longer be controlled? Pazzi deftly straddles the genres of fantasy and verismo, laying a meticulously researched foundation for a plot with twists and turns as serpentine as those of any Roman catacomb. As the bizarre, almost chimerical events of the conclave stretch from weeks into months, the elderly clergy begin plotting their escape from the bitter isolation required by papal law. The novel's main character is Malvezzi, the endearing cardinal of Turin, who begins to feel his grip on reality slipping. "Maybe this is how insanity comes on: like an odd habit that you can't find time to address, always waiting for a more opportune moment, until finally it becomes tolerable, almost insignificant." Composed in prose so rich and finely tuned—and seamlessly translated by Stransky—that readers can smell the incense, the novel ends when Pazzi's assembled cardinals at last elect a most unlikely candidate. As clever as Calvino, and funnier, Pazzi deserves a larger readership in this country.