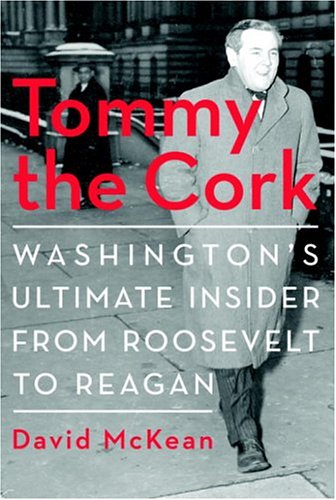 TOMMY THE CORK: Washington's Ultimate Insider from Roosevelt to Reagan

Thomas G. Corcoran was one of the first modern lobbyists, a Washington power broker from his early years as an influential member of Franklin D. Roosevelt's "brain trust" through his postwar career representing a host of corporate, political and even religious interests. The young Irish Catholic Corcoran came to Washington to clerk for the great jurist Oliver Wendell Holmes, the first of a series of powerful mentors that included Felix Frankfurter, Sam Rayburn and Roosevelt himself. Nominally employed by the Reconstruction Finance Corporation, Corcoran gradually took on a complicated role in support of FDR's New Deal, helping to draft the legislation that created the Securities and Exchange Commission while building a network of government cronies and developing his skills as a political arm-twister. After leaving government in 1941, Corcoran spent almost 40 years as an increasingly conservative "fixer" for companies and causes ranging from the notorious United Fruit Company to the Pharmaceutical Manufacturers Association. McKean is chief of staff for Sen. (and Democratic presidential hopeful) John Kerry and previously wrote a biography of another great power broker, Clark Clifford. Although McKean occasionally suggests idealistic motivations behind his subject's maneuvering, Corcoran comes across as an amoral operator, seeking power and influence for their own sake. This biography offers an intriguing glimpse of how the power game in Washington evolved in the middle decades of the 20th century as well as sketches of Holmes, FDR, Joseph P. Kennedy, Lyndon Johnson and many other notables; even columnist Maureen Dowd makes an appearance as a cousin of Corcoran's wife, Peggy. B&w photos.