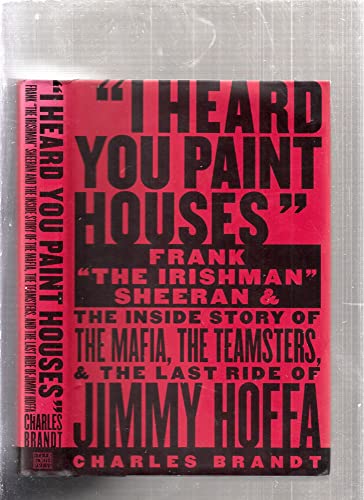 "I HEARD YOU PAINT HOUSES": Frank "The Irishman" Sheeran and the Inside Story of the Mafia, the Teamsters, and the Last Ride of Jimmy Hoffa

Former prosecutor Brandt promises more than he delivers in this rambling account of the career of Teamsters president Jimmy Hoffa that's long on sensational claims and short on credibility. Brandt crafts a first-person narrative for Frank "The Irishman" Sheeran, a confessed murderer and close associate of Hoffa's who died last year, while doing little to verify Sheeran's many fantastic yarns, which include responsibility for supplying rifles for the real assassins of President Kennedy. In his most plausible boast, Sheeran names Hoffa's killer. To his credit, Brandt refers to evidence undermining his source's veracity: another publisher canceled this title after a letter Hoffa supposedly wrote supporting much of Sheeran's story was found to be a forgery. The author's uncritical acceptance is perhaps explained by his relationship with his subject. Brandt admits that he served as a pallbearer for Sheeran "[b]ecause of all that was positive" in the life of a vicious thug who cheated the union he was supposed to serve.