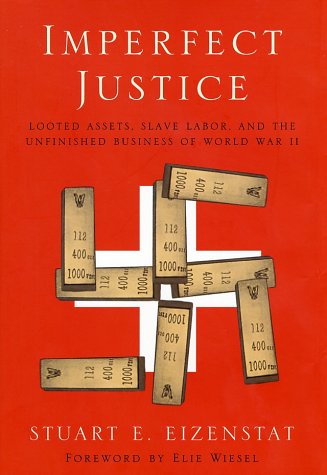 Think of this book as one-stop shopping to learn about the Holocaust restitution negotiations of the late 1990s. Eizenstat was at the center of the tornado, as European companies and banks belatedly made compensation for their WWII-era behavior. In this comprehensive, well-written and unsparing reflection on those negotiations, the former Clinton administration official offers a behind-the-scenes look at how agreements were reached to provide Holocaust survivors with monies they or their families had lost during the war. He begins with the unusual pair of World Jewish Congress (whose president, Edgar Bronfman, was a friend of Clinton's) and Republican Sen. Alfonse D'Amato, who teamed up to make this an issue that Europe could not ignore. Whether writing about the most well-publicized of these negotiations—the German slave labor agreement or the "Swiss gold" affair, which eventually led to a $1.25-billion settlement—or some of the lesser-known accords, Eizenstat tells his story with flair and with due regard for the role of politics (D'Amato, for instance, "milked the Swiss controversy for everything it was worth"). According to Eizenstat, some elements of the survivors' cases carried little legal weight, but European governments and firms wilted under public relations pressure, often purposefully intensified by lawyers on behalf of the survivors. While other books have been written about this subject, none has been as comprehensive or as balanced. 8 pages of b&w photos, not seen by