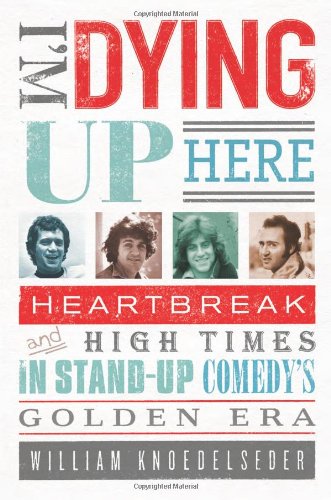 In 1978, Knoedelseder ( ) was a journalist assigned to cover newcomers transforming the comedy clubs: “For the next two years, I had stage-side seats at the best show in show business.... I met and wrote about Jay Leno, David Letterman and Richard Lewis before the world knew who they were.” Mitzi Shore, recently labeled “the Norma Desmond of Comedy” by the , took over L.A.’s Comedy Store in 1973 with a no-pay policy because she saw it as “a training ground, a workshop, a college.” It became a focal point for local comics, including Lewis, his friend Steve Lubetkin, Elayne Boosler, Tom Dreesen, Letterman, Leno and many more. Some were in desperate circumstances, surviving by living in their cars and eating bar condiments. Driving a silver Jaguar to her “massive, cash-generating laugh factory,” Shore was seen as “cunningly manipulative,” and her unfair payment policies led to an organized strike in 1979 by the CFC (Comedians for Compensation). This confrontation of comics vs. club owner (“Not... one... red... fucking... cent”) is the core of the book, with the suicide of Lubetkin taking the tone from comedy to tragedy. Filmmakers will eye this as a potential property similar to Bill Carter’s (1996), about Letterman and Leno. Knoedelseder skillfully layers powerful dramatic details, and readers will shelve the book alongside those other key classics on comedy: Steve Allen’s and Janet Coleman’s .