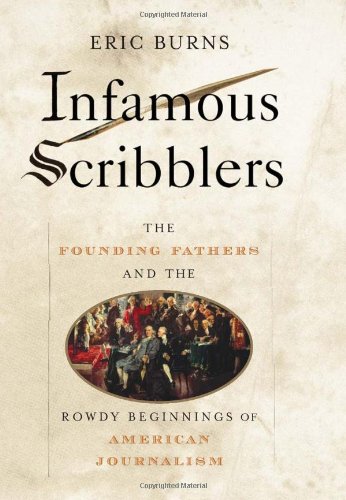 Infamous Scribblers: The Founding Fathers and the Rowdy Beginnings of American Journalism

Considering the many noble accomplishments of early American culture, Burns observes, the levels of vulgarity and partisanship in colonial newspapers should strike modern readers as shocking. Given the ideological jousting taking place on talk radio and in the blogosphere today, he may be overstating the case, and at times the condemnation feels as if it's laid on a bit thick, but Burns's historical examples of journalistic excess—rabid language, character assassination, even outright fabrication—never bore. From the sniping feuds among Boston's first papers to sex scandals involving Alexander Hamilton and Thomas Jefferson, the snappy patter gives clear indication of how much Burns, a Fox News anchor and accomplished historian ( ), relishes telling his story. With so much attention on the Founding Fathers in recent years, many sections, like those on Ben Franklin's early publishing career and the intense rivalry between Jefferson and Hamilton, each of whom underwrote a paper to propagate his point of view, will be familiar. For every recognizable anecdote, however, Burns weaves in fresh elements like the vicious feud between publisher James Franklin (Ben's older brother) and Cotton Mather over smallpox inoculation, keeping the entertainment levels high.