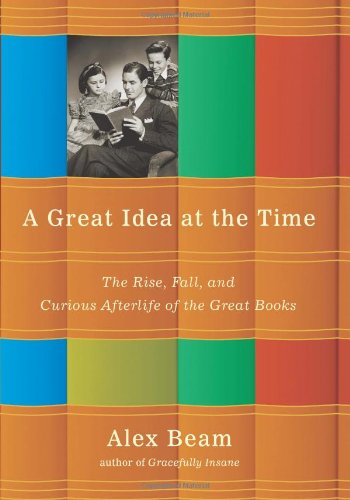 A Great Idea at the Time: The Rise, Fall, and Curious Afterlife of the Great Books

Before the dawn of the television age, in an ambitious effort to enlighten the masses via door-to-door sales, Encyclopedia Britannica and the University of Chicago launched the Great Books of Western Civilization, ""all fifty-four volumes of them... purporting to encompass all of Western knowledge from Homer to Freud."" Led by the ""intellectual Mutt 'n' Jeff act"" of former University of Chicago president Robert Hutchins and his sidekick Mortimer Adler, the Great Books briefly, and improbably, caught the nation's imagination. In his discussion, Boston Globe columnist Beam looks at how and why this multi-year project took shape, what it managed to accomplish (or not), and the lasting effects it had on college curricula (in the familiar form of Dead White Males). Beam (Gracefully Insane: Life and Death Inside America's Premier Mental Hospital) describes meetings endured by the selection committee, and countless debates over Euripedes, Herodotus, Shakespeare, Melville, Dickens and Whitman (""When it comes to Great Books, no one is without an opinion.""), but tells it like it is regarding the Syntopicon they devised-at ""3,000 subtopics and 163,000 separate entries, not exactly a user-friendly compendium""-and the resulting volumes, labeling them ""icons of unreadability-32,000 pages of tiny, double-column, eye-straining type."" By lauding the intent and intelligently critiquing the outcome, Beam offers an insightful, accessible and fair narrative on the Great Books, its time, and its surprisingly significant legacy.
close
Details