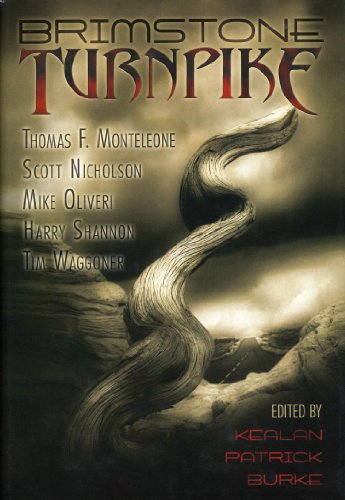 The five novellas in this slapdash mosaic anthology are loosely interconnected by the presence of Johnny Divine, a hoodoo man who materializes magically in each story to present lost travelers who accidentally stray onto the unmapped Brimstone Turnpike with knickknacks that alter their lives supernaturally. In Thomas F. Monteleone's "The Prime Time of Spenser Golding," a pair of eyeglasses given to an egotistical television newscaster allows him to see the "truth" behind his stories—whereupon he become a self-righteous blowhard of a reporter. In Michael Oliveri's "Warning Signs," a magic pendant bestowed on a woman in a troubled marriage warns her of menace from a predictable suspect. In the other stories, Divine's gifts stir up weird scientific experiments and skeletons in family closets. Burke ( ) appears not to have specified to contributors whether Divine should be depicted as an agent of good or evil, with the result that his character flip-flops confusingly from story to story. His role in some of the tales is so superficial that readers may wonder if the stories wouldn't have worked better without his appearance.