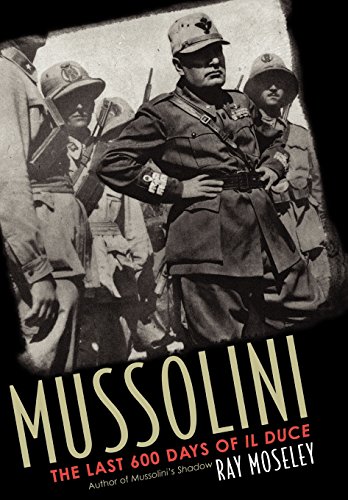 With a lucid style and a well-paced narrative, Moseley chronicles how, while Hitler and Nazi Germany became more radical, Mussolini and Fascist Italy degenerated into chaos. Moseley, former chief European correspondent for the and author of a highly regarded biography of Mussolini's foreign minister and son-in-law, Galeazzo Ciano ( ), has written a welcome synthesis of the final months of the fascist regime, beginning in 1943. In doing so, he uncovers the venality, intrigue, corruption, treachery and barbarism of the Fascist and Nazi regimes. The day after the Allies invaded Sicily and made preparations for an invasion of the mainland while their planes were bombing Rome, Turin and Milan, Mussolini was deposed by King Victor Emmanuel III in a (for the time being) bloodless coup d'état. Moseley shows how Ciano was instrumental in this development and the tragic fate that awaited him. Mussolini is portrayed (accurately) as deflated, depressed and having come late to the realization that he had "ruined Italy." Moseley devotes chapters to the fate of the Roman Jews; the partisan underground; and wartime atrocities, (most of which are attributed to the Germans, thereby giving the false impression that Italian Fascists committed no war crimes). Moseley's telling of the theft of Mussolini's corpse and the return of a fragment of his brain reads like the plot of a bad horror film.