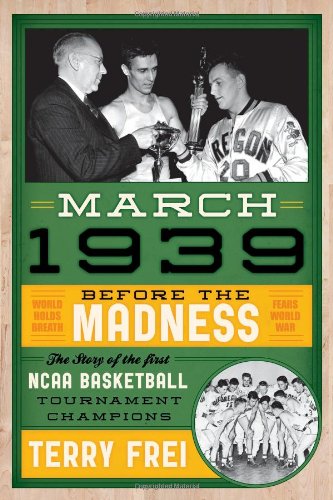 March 1939: Before the Madness: The Story of the First NCAA Basketball Tournament Champions

With the historic events of 1939 rapidly spinning into global conflict, Frei ('77: Denver, the Broncos, and a Coming of Age) looks back at the first NCAA Basketball Tournament when head coach Howard Hobson guided the underdog Oregon Webfoots to the national championship against all odds Hobson, in his fourth year as Webfoots coach, recruited in a competitive collegiate market, personally going after two titans, Lauren "Laddie" Gale and Urgel "Slim" Wintermute, who towered over 6-foot-8 inches, then proceeded on a reign of hoops terror. Wisely contrasting the mayhem of college sports and Hitler's Third Reich onslaught, Frei goes behind the scenes to examine Hobson's methodical game strategies of his team, "The Tall Firs," against all comers, juxtaposed against the Nazi leader's shrewd march across Europe. Along the way, the author, an admirer of Long Island University coach Clair Bee, tips his hat to the man who led the LIU Blackbirds to the second annual national invitation tournament in New York, the NCAA tournament's rival. Carefully crafted, fast-moving, and refreshing, Frei's study of the scrappy Oregon Webfoots' campaign from a 29-5 season record to best the finest at both ends of the basketball court, ending with the first NCAA tournament victory over Ohio State Buckeyes, is quite memorable. (Feb.)
close
Details