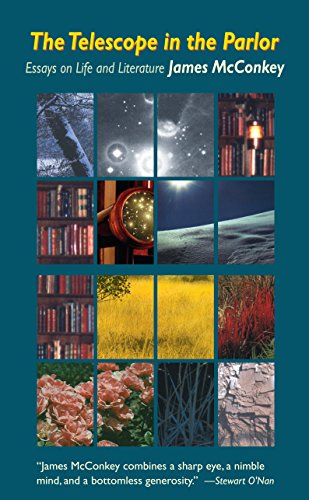 THE TELESCOPE IN THE PARLOR: Essays on Life and Literature

In this meditative collection of intelligently reflective essays, McConkey ( ), an emeritus professor of English at Cornell, looks back from his 83rd year on his evolution as a reader, thinker and family man. McConkey, a memoirist, muses engagingly on his choice to become "a writer of my own experiences" while devoting himself to the theme of memory and its role in literature and the life of the mind. In an essay on reality and imagination in literature and psychology, McConkey makes a heartfelt case for modernist writers' focus on the inner self. Analyzing Chekhov's story "In the Cart," he longs for a satisfying theory of memory adequate to the nuances of such a masterly piece of fiction. Displaying a gift for relating his most impassioned reading to his emotional and intellectual growth, he reappraises Christopher Morley's essay-novel in the context of his own childhood, one disrupted by his parents' divorce and financial hardship. McConkey includes several pieces that recount his blissful adult family life, conveying an idyllic sense of cherished relationships and landmarks, literal and figurative. Elegant and deeply personal, McConkey's essays reveal a seasoned mind and a soulful spirit.