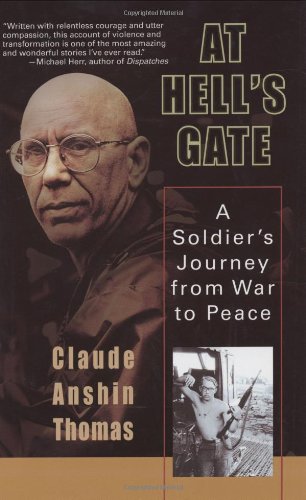 AT HELL'S GATE: A Soldier's Journey from War to Peace

In 1965, after a difficult childhood and an unruly adolescence, Thomas, aged 17, joined the army at his father's suggestion. He put in a combat-heavy tour of duty as a door gunner and crew chief with the 116th Assault Helicopter Assault Company in Vietnam, an experience that left deep emotional scars. After coming home, he endured drug-fueled suicidal, antisocial and violent episodes before turning his life around in the early 1980s as a result of studying with the Vietnamese Zen Buddhist monk Thich Nhat Hanh. He now devotes his life to doing the work of "a wandering mendicant monk," and he wrote this short volume, he says, as a form of therapy, "something to help me keep a grip on my sanity." The result is a combination memoir, Zen primer and how-to book of meditative techniques. Thomas evokes his experiences in Vietnam and the emotional trauma he has gone through since the war with clarity and insight; the Zen lessons emphasize mindfulness and meditation. Thomas, unfortunately, repeats an egregious, unsubstantiated allegation about Vietnam veterans: that "more than 100,000" have committed suicide since the war. That is a myth, even though it is true that Vietnam veterans have had disproportionately high readjustment problems since returning from the war.