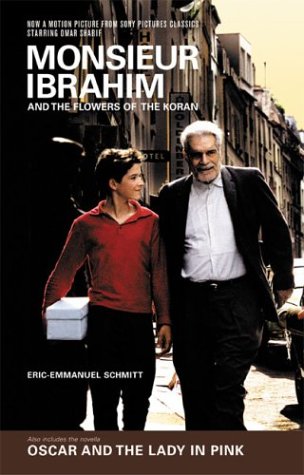 MONSIEUR IBRAHIM AND THE FLOWERS OF THE KORAN

Those who believe that America has had an undue influence on France need look no further for evidence than the two short novellas collected here. Schmitt, a French writer making his English-language debut, has produced stories with the arc and tone of Hollywood tearjerkers. In the title novella, a Muslim shopkeeper befriends a lonely Jewish boy named Moses, aka Momo. Momo's mother vanished when he was young, and his father, a failed lawyer, stays around only long enough to tease Momo with stories of Popol, his supposedly perfect older brother. Ibrahim, the shopkeeper, takes Momo under his wing, instructing him about life, love and the old ways of a country he's left behind. Schmitt, an accomplished playwright, is clearly accustomed to having actors fill in the blanks in his work, because without them the characters remain as thin as cardboard, vague sketches of well-meaning intercultural understanding. The second novella, "Oscar and the Lady in Pink," repeats the tale of an abandoned boy and a surrogate parent, this time set in a hospital ward. Ten-year-old Oscar, a cancer patient known as the Bald Egg, turns to an elderly hospital volunteer named Mamie-Rose for comfort. As Oscar moves toward his inevitable end, he tries to build relationships, though fleeting, with those around him. While some of the scenes between Oscar and his fellow child-patients are genuinely moving, the overall conceit—the story is told in the form of letters to God—is so sentimental that it crushes the more subtle elements.