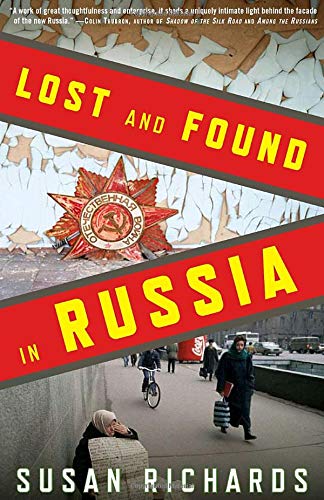 Lost and Found in Russia: Lives in a Post-Soviet Landscape

Part travelogue, part contemporary history, Richards's new work explores postcommunist Russia from the point of view of the Russian people directly affected by one of the 20th century's most defining sociopolitical events, the collapse of the U.S.S.R. Recounting her travels in Russia from 1992 to 2008, Richards, who wrote the PEN/Time-Life Award–winning Epics of Everyday Life, focuses on the country's forgotten provinces and the lives of her friends—the monastic, poetic journalist Anna; the manic, wandering couple Natasha and Igor; entrepreneurial Misha and his serene beauty of a wife, Tatiana. As a writer Richards wears her heart on her sleeve, and her story is full of empathy, frustration, and admiration as she observes her friends going through the roller-coaster of emotions, from hope to despair. And while glimpses into the lives of Russia's common folk are interesting, the real gems Richards uncovers are about the parts of the Russian society and mindset that remained hidden from Western eyes for nearly a century. Whether she is discovering a town said to be frequented by UFOs, exploring Russia's development of parapsychological weapons, or visiting a lab where "communication with the divine" is studied, Richards is constantly exposing a mystical and religious side of Russia that flies in the face of Western rationalism. (Dec.)
close
Details