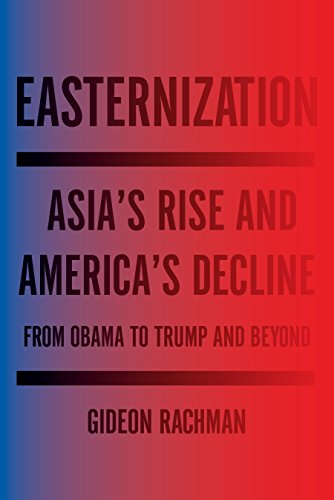 Easternization - Asia's Rise and America's Decline: From Obama to Trump and Beyond

Rachman (Zero-Sum Game), chief foreign affairs commentator for the Financial Times, takes a cue from the tide of Westernization that gradually spread over the globe from the 15th century onward, and is only now being beaten back by the growing economic, strategic, and military power of Asia, with China at its fore. “Easternization,” Rachman contends, is the central problem with which the U.S. will have to contend in the 21st century; the much-vaunted “pivot to Asia” notwithstanding, the rise of Asia will have myriad and far-flung consequences for regions as seemingly disparate as Russia, the Middle East, and Africa. Weaving a smattering of history with insights gleaned from his interviews with global power players, Rachman offers a fast-paced and diverting analysis of the challenges facing U.S. foreign policy in the Pacific. His account, however, is short on research and long on exposition, with the nuances of history and ideology largely whizzing by. More problematically, Rachman, like many observers of international politics, seems to view Asia, and particularly China, as a mysterious and opaque civilization whose rise should automatically send global alarm bells ringing, when it’s clear that the pursuit of what Chinese president Xi Jinping extols as the “China Dream” is not all that different from its American counterpart. (Apr.)

This review has been corrected to reflect the proper title and subtitle of the book.