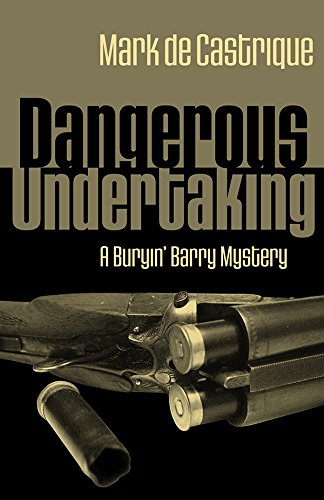 Ably following in the footsteps of Margaret Maron, TV and film producer de Castrique sets his first novel among the folk who populate Gainesboro, N.C., and the surrounding hill country. The book opens with a powerful bang: mentally unbalanced Dallas Willard appears at the burial service for his grandmother, Martha Willard, shoots two relatives to death, then turns his shotgun on undertaker (and former Charlotte policeman) Barry Clayton, whom he wings in the shoulder. Dallas's motive? To preserve land worth $3 million that other members of his family planned to sell right away. Why shoot the undertaker, though? Because Dallas wants Barry to go to heaven and tell Martha nobody is going to take her property! Dallas escapes in his pickup, but when his body turns up at the bottom of a quarry pond after a second shooting incident, Barry realizes he himself could become the unknown killer's next victim. The author sensitively depicts the hill people, including Barry's childish and fearful father, owner of the mortuary, who's losing his battle with Alzheimer's. Fortunately, Barry has gorgeous Dr. Susan Miller to love him and sew him up when he's injured. Adept at both the grizzly and the graceful, de Castrique has produced a marvelous mystery you won't want to put down.